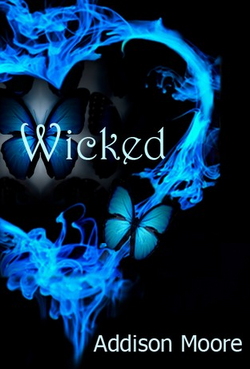 Wicked is a novel by Addison Moore and the fourth book in the Celestra series.

Wicked is 228 pages long and was first published on September 15th 2011 by Moore on Amazon Digital Services. It is available for download on Amazon.

Seventeen year-old Skyla Messenger is wishing people would just stay dead. With Chloe back, Skyla finds it difficult to live under her tyranny and threats. A seemingly innocent misstep in Skyla’s past comes back to haunt her and could end up costing her relationship with Gage. [1]