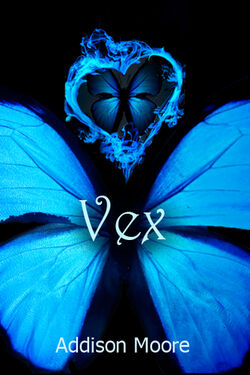 Vex is a novel by Addison Moore and the fifth book in the Celestra series.

Vex is 368 pages long and was first published on November 29th 2011 by Moore. It is available for download on Amazon.

Seventeen year-old Skyla Messenger finds herself lying on an altar as a sacrifice to the enemy. Being an angel of the highest Nephilim order hasn’t been easy. Her first love has cast his allegiance to the Countenance, the Sectors and the Fems see her as nothing more than a celestial pawn, and the dead girl she helped bring back to life has blackmailed her into relinquishing her boyfriend. Skyla is determined to change all that. She's decided to never trust Logan again, to turn the tables on the Sectors and the Fems, and get dirt on Chloe to blackmail her into leaving Gage alone. But, when one obstacle after another gets in her way, Skyla can hardly find the strength to carry on. The only solution seems to be to sacrifice herself to the Sector in her life and put everything in order while losing everything she values most. [1]