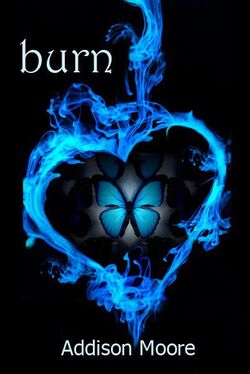 Burn is a novel by Addison Moore and the third book in the Celestra series.

Burn is 207 pages long and was first published on July 13th 2011 by Moore on Amazon Digital Services. It is available for download on Amazon.

Sixteen year-old Skyla Messenger is having difficulties with the living and the dead. With Chloe’s diary in her hands, Skyla embarks into the mind of one of Paragon’s most twisted former residents. After accidentally kick-starting the faction war, Skyla finds herself in more danger than ever before. So, when Marshall Dudley offers her a taste of the gift of knowing, Skyla attempts to use it to alter the outcome of future prophesies. And now that Skyla’s love life seems to involve one boy too many, she must choose who to be with. If she waits too long, the decision just might be made for her. [1]